Politicians like to talk about migration in water metaphors. Migrants always seem to come in flows, waves or tides. They also like to give voters the image that they are “in control” of immigration; indeed, that immigration is a flow that can be turned on and off like a tap. 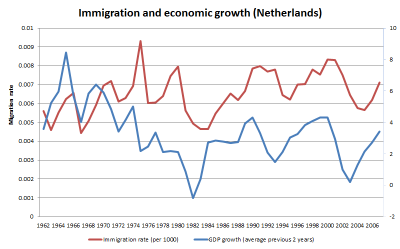 In reality, politicians are much less in control of immigration than they would like people to believe. For instance, liberal democracies can do little about family immigration, because the right to family life is enshrined in international humanitarian law. Migration is also facilitated through migrant networks, which decrease the costs and risks of migrating.
Politicans' tough talk on immigration obscures that the economy is the prime driver of migration. In all wealthy societies, there is structural demand for immigrant labour, for the high skilled but also the low skilled, in the official and illegal sectors. Years of neoliberal policies in the form of privatizing and de-regularizing labour markets have hugely expanded the demand for immigrant labour for temporary, unattractive and low-paid jobs in cleaning, catering, agriculture, factory work and care that native workers typically shun.  At the same time, politicians are under pressure by employers and big business to either allow higher quotas of immigrants or turn a blind eye when faced with illegal migration.
This is what happens in practice: Politicians know all too well that migration serves vital economic interests, and cannot stop immigration even if they would want so, but do not dare to tell so to their voters. Their tough talk about reducing immigration is usually nothing more than a smokescreen to hide their inability and unwillingness to stop immigration.
Not convinced yet? Do you think this is just left-wing talk? Please look at the graph above. The blue line shows the average of economic growth (indicated on the right hand axis) in the previous two years in the Netherlands. The red line shows the immigration rate as a percentage of the total population (on the left hand axis). As you can all see, there is an incredibly close relationship between economic growth and immigration rates. Isn’t that a smoking gun?
Migration is a demand-driven phenomenon and the business cycle is an accurate predictor of immigration.  Similar graphs can be drawn for most other Western countries. The irony is that the correlation between economic growth and immigration is particularly high for countries such as Germany and The Netherlands who have long denied being immigration countries. Despite all the anti-immigration rhetoric, such countries have high immigration rates.
Decades of globalization and regularisation have created open societies and economies, which will inevitably attract migrants as long as they keep on growing. In that sense, borders are indeed beyond control to speak with Jagdish Bhagwati. As long as demand persists, migration will continue. If governments try to close legal channels for labour migrants, they will either come as family migrants or as irregular migrants. This is also what makes all these discussions on the economic impacts of immigration a bit artificial, as the assumption is that immigration can somehow be stopped or significantly reduced. This is both denying history and the demand-driven nature of immigration. It is not so much “immigrants come and take our jobs”, but rather “Immigrants: your country needs them” as runs the title of Philippe Legrain’s book.
Indeed, the only way to drastically reduce immigration is to wreck the economy.  A prolonged economic recession is therefore the only recipe to reduce immigration.   And this is indeed what we are seeing in several south European countries, which are now seeing ‘negative’ migration with more people leaving than coming.
The same may happen in north European countries, such as the Netherlands, if they plunge back into the ‘double dip’ recession. If this happens, anti-immigrant parties will certainly cry out with shouts of victory that this shows the success of their harsh policies, while in reality, it was the recession and unemployment that explain reduced immigration.
But if economies pick up again, immigration will surely pick up again too.
As so often with migration: It’s the economy, stupid!
Posted by Hein de Haas at 3/26/2012 11:47:00 pm 5 comments:

The Arab Spring and Migration