The 1.5 million migrants lie: How Gaddafi, Europe and Frontex invented the migration invasion

In previous posts I have tried debunk the popular myth that Europe should brace itself for a migration invasion or "Biblical exodus" following the popular uprising and violence in Libya.
The idea is that up to 1.5 million African migrants are waiting in Libya for the first occasion to migrate to Europe. This idea is based on a number of common misunderstandings about North African and Libyan migration.
The most fundamental and persistent misunderstanding is that Libya is a so-called "transit country" - or the assumption that most or all migrants in Libya would be "on their way" to Europe. This totally ignores the basic fact that over the past 40 years, Libya has been as destination country in its own right. For more information on the historical roots of trans-Saharan migratoin to Libya, I can recommend a recently published paper by French migration researchers Sylvie Bredeloup and Libya-specialist Olivier Pliez.
Like other oil states in the region, since the 1970s oil boom, sparsely populated Libya lacked the labour and skills needed to run the oil industry, expand road and urban infrastructure, construct houses, to run restaurants, clean the houses, to run farms, so on. Over the past decades, the Libyan economy has become totally dependent on migrant labour, particularly in the private sectors. Most Libyans work for the government, and many shy away from doing arduous, manual jobs.
While most migrants initially came from North African countries, from the 1990s Gaddafi started welcoming people from sub-Saharan African countries to migrate to Libya. Although reliable statistics do not exist, over a million, perhaps 1.5 sub-Saharan migrants are often believed to live in Libya, apart from many Egyptian, Tunisian, Asian and European migrant workers.
Although they were an easily exploitable, cheap workforce, they increasingly became target of racist attacks, and in 2000 dozens of sub-Saharan African migrant workers were killed during street riots. This was the beginning of a period of mounting racism, and African workers got increasingly blamed for all sorts of social ills such as crime, disease and unemployment. Gaddafi encouraged this as blaming "Black" African migrants distracted the attention from the real causes of Libya's economic decline and social discontent.
Although the racist attacks and the deteriorating situation in Libya prompted some sub-Saharan migrants to move to other Maghreb countries or to Europe, the large majority came to Libya to work. As European, Egyptian, Tunisian and Asian migrant workers in Libya, various press reports confirm that the large majority wants to go home. The real tragedy is that many sub-Saharan African are stuck in Libya, and fear violence by pro- and anti-Gaddafi groups, also because they risk to be mistaken as supposed "black mercenaries".

About 400,000 migrant workers and Libyans have left Libya so far over the Egyptian-Libyan and Tunisian-Libyan land borders, and nearly all are returning home. This has nothing to do with the thousands of Tunisians arriving at the Italian island of Lampedusa, who are mainly would-be migrant workers and part of the yearly springtime increase in cross-Mediterranean migration.

According to media sources, less than 1000 refugees and migrants have arrived in Malta and Lampedusa from Libya so far. More may surely follow the longer the conflict persists, but this has nothing to do with a biblical exodus.
"How come" that many belief that all these supposedly 1.5 million migrants are on their way to Europe, and are now waiting for the first occasion to jump on the boat to Europe?
There is evidence that this is not "just" a misunderstanding, but a lie consciously brought into the world by Gaddafi, Italian and other European governments as well as Frontex, the EU border agency. They all have a political and financial interest in creating panic and fear about a looming immigrant invasion. Rebranding the 1.5 million resident migrant workers in Libya as "transit migrants" was the perfect recipe.
For populist politicians in Italy and elsewhere in Europe, fearmongering about an impending African immigration invasion was a successful electoral strategy to rally people behind a common cause and to blame migrants. It also gave EU politicians the perfect excuse to lift the arms embargo on Libya in 2004, with the excuse that Libya needed those arms to "fight illegal migration". This opened the door for the Italian, French, British and German arms industry to sell weapons to Gaddafi that he is now deploying against his own citizens.
In many ways, a problem of the looming African invasion was "invented"so that we had an excuse to "combat" what was basically an invented problem - and so the "combating" will always be a success. Eager as Gaddafi was in those days to regain international respectability, he was also happy to cynically exploit the "myth of invasion" by signing migration deals with European countries. Gaddafi's migration pact with Berlusconi also resulted in Libya taking back sub-Saharan migrants from Italy and deporting  them over Libyan territory to their origin countries, where several of them faced persecution. This was a clear breach of refugees rights, but few European politicians really cared.
As early as June 2003 (!), the Italian interior minister claimed that 1.5 to 2 millions of Africans would be waiting in Libya to illegally cross to Europe. In the wake of the Libyan crisis, similar insinuations have been made by Italian ministers Frattini and Moroni ("Biblical Exodus") as well as French, Dutch, Swiss, and other European politicians. Italian interior minister Moroni warned of a "biblical exodus"and "an invasion of one million, 1.5 million that would bring any country to its knees."
The invasion imaging fits perfectly into the strategy of a new generation of European politicians who, since the end of the Cold War, have defined immigration as the central problem of our time. They also skillfully amalgamate fear of immigration and Islam. Populist politicians who aim to links most social and economic problems to “mass immigration” have therefore an interest in a strong magnification of the actual migration phenomenon. It is also an apt means to distract attention from domestic problems.

Politicians are aided by sensationalist media which copy politicians discourses and interpret the sight of each fishing boat overloaded with migrants as a harbinger of the looming African exodus. All this together creates the image of a threat, the "black danger”, or even "a potential tsunami of up to 1.5 million migrants and refugees". This has been a consistent pattern over the past decades: every arrival of migrant boats are consistently interpreted as the harbingers of a migration exodus that will crash upon the shores of Europe.

But what about Frontex, Europe's border agency? Also Frontex joint the chorus of liars by recently stating that "as many as 1.5 million migrants are ready to risk anything to set foot on European soil". According to another press report, Frontex stated that between 750,000 and 1.5 million would-be economic migrants from Africa would be "holed up" in Libya.

Why would they be lying?

Frontex is supposed to guard Europe's lengthy external borders. The effectiveness of its actions can be seriously questioned in view of the near-impossibility to guard several 10,000s kilometers of Mediterranean coastline.
The main effect of increasing border controls has been a diversion of migration flows to other sea crossing points - a cat-and-mouse-game with no end.
The budget of Frontex has literally exploded from 6.2 million Euro in 2005 to no less than 87.9 million Euro in 2010 - an astonishing fourteen-fold (!) increase in just 6 years.
Obviously, it is also in their interest to represent migration asa danger in order to make themselves more relevant. Creating a "state of emergency" is an effective way to divert the attention away from a more rational debate about the efficiency of their actions and the monstrous dimensions of their budget.
So, the 1.5 million lie serves them well, too. 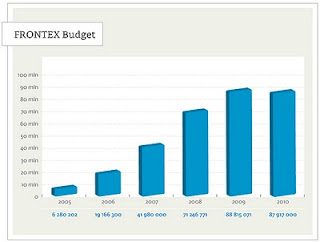