In my previous blogpost, I expressed skepticism on the question whether the upcoming High Level Dialogue (HLD) on Migration and Development will yield any concrete result, mainly because governments of wealthy countries are unwilling to protect the rights of the lower skilled and refugees and to commit to more liberal immigration policies.

In a reaction, Barbara Harrell-Bond, the founder of Oxford's Refugee Studies Centre, wrote to me that it is equally important to remind governments of developing countries that they also receive migrants and refugees.

She pointed out that major emigration countries such as Egypt and Morocco ratified the International Convention on the Protection of the Rights of All Migrant Workers and Members of their Families "for very self-interested reasons, because they were concerned with their emigrants, not because they ever expected to deal properly with their immigrants". Governments of emigration countries should therefore be challenged to behave themselves.

Harrell-Bond's argument is based on her experience living in Egypt for eight years, where she established the Refugee Legal Aid Project (now known as AMERA-Egypt), and also through her work with NGOs in Morocco on legal aid for refugees.

I could not agree more. Countries in Africa, the Middle East and Asia often have an appalling record when it comes to dealing with immigrants and refugees on their own territory. In Morocco and Egypt, for instance, migrants and refugees often lack access to protection, residency, basic health care, education, and often suffer from racist violence, discrimination and exploitation on the labour market. 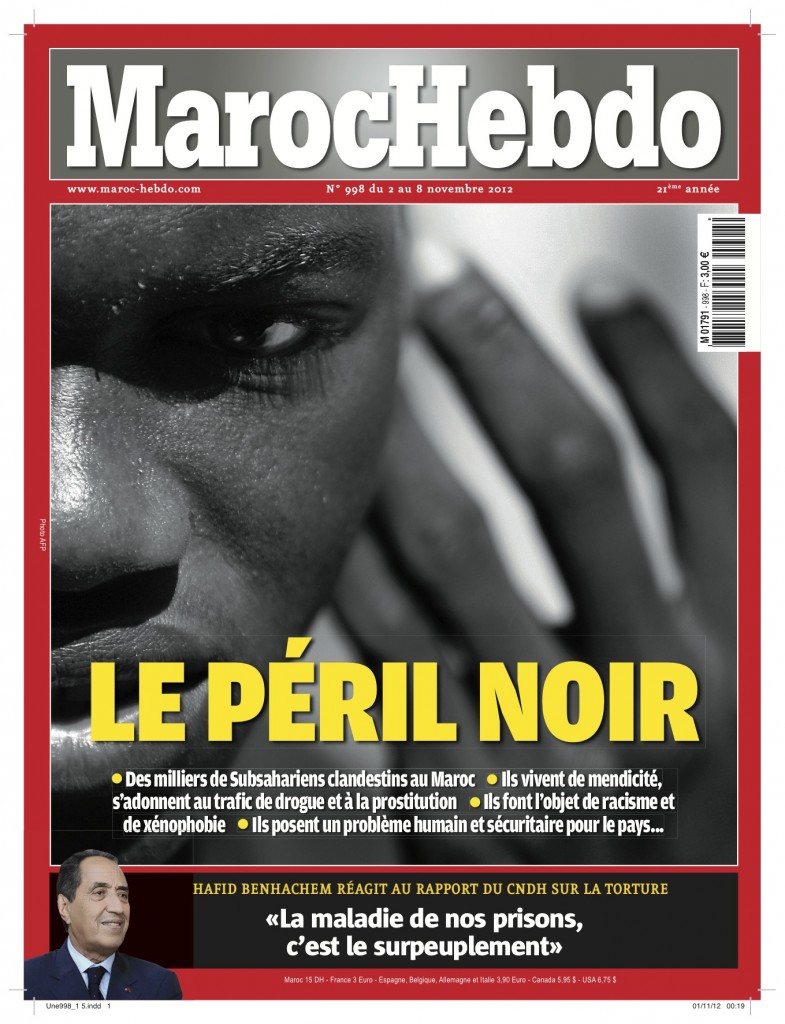 In Egypt, refugees from Syria (and elsewhere) meet with open hostility. In Morocco, over the past years police has regularly raided immigrant neighbourhoods, irregular migrants have been arbitrarily imprisoned and deported to the Algerian border. Even recognized refugees have difficulties to obtain residence permits.

In November 2012, the Moroccan weekly Maroc Hebdo ran a cover story representing the few tens of thousands of sub-Saharan immigrants in Morocco as the 'Black Danger' (Péril Noir, see image above), portraying them as a major security threat. Some Moroccan politicians have also started to play the race card by blaming immigrants for problems such as crime and unemployment.

Such harsh treatment, open racism and abuse of the migrant rights in countries such as Morocco and Egypt obviously undermines the case for protection of their own emigrants living in Europe and the Gulf. This is exactly the argument that human rights activists in Morocco have used: It is hypocritical to blame European governments for racism and discrimination as long as we treat our own immigrants so badly.

Perhaps such criticism have inspired the immigration reforms that have recently been announced by the Moroccan king Mohammed VI, following from a report submitted by the National Human Rights Council (CNDH). Although it remains to be seen whether this will result in any concrete policies, the proposed measures include the regularisation of sub-Saharan and European immigrants.

If Morocco really embarks upon these immigration reforms, this would signify a significant breach away from the past decade, during which Morocco was put under pressure by the European governments to take on the role of the EU's 'border guard'. As part of their self-proclaimed 'fight against illegal migration', European governments have been all too happy to turn a blind eye to the bad treatment of migrants and refugees on Moroccan territory.

In the same vein, the EU has not only tolerated but actively encouraged severe violations of migrant rights in other countries in Africa and the Middle East like Senegal, Libya, Egypt and Turkey - through the supply of 'aid', border patrolling equipment and 'technical assistance' on how to best detect, round up, imprison and deport migrants.

It would therefore be a major step forward if governments of major emigration countries start to recognize that their calls for the protection of their citizens abroad can only be legitimate if they also behave themselves.
Posted by Hein de Haas at 9/18/2013 04:27:00 pm No comments:

More of the Same? High-Level Dialogue on Migration and Development

On 3 and 4 October, the General Assembly of the United Nations will hold the High-Level Dialogue (HLD) on Migration and Development. This is the second HLD after the first meeting in 2006. The HLD aims to bring together governments, international organisations and so-called 'civil society organisations' to discuss how migration policies can be improved for the benefit of migrant receiving and migrant sending societies and, last but not least, the well-being of migrants and their families themselves. One of the main stated objectives of the HLD is the "mainstreaming of human rights into all aspects of the migration debate".

As such, it is positive that such meetings take place alongside related initiatives, such as the yearly Global Forum on Migration and Development. However, the real question is whether any real progress will be made. "Mainstreaming of human rights" may sound great, but it is exactly the thorny issue of migrant rights that explains the lack of concrete progress that has been made during such fora over the past seven years, despite all the talking.

Governments of developing countries typically favour more liberal immigration regimes and better protection of the rights of their citizens living abroad. This is based on the idea that migrants who enjoy residency rights and who are successful in education and work and protected from discrimination and exploitation also have a greater capacity to remit money home, to pay regular return visits, and to invest in origin countries.

Conversely, migrants who are in irregular situations, are exploited on the workfloor and live on the margin of receiving societies often lack such capacities to send money, return and invest. In other words: immigration restrictions decrease the 'development potential' of migration, and the real recipe for releasing the development potential of migration is to liberalise immigration regimes for the lower skilled, which would allow them to access better jobs, to improve their skills and earn more money. This resources would also enable them to contribute to engage with the social, economic and political development of origin countries.

However, governments of wealthy countries have been typically reluctant to design more liberal immigration policies, in particular for low-skilled workers from poor countries. As far as these governments are willing to discuss the topic of migration and development, this is done in the context of temporary or 'circular' migration schemes, based on the erroneous idea that that voluntary or forced return will boost 'development' in origin countries. and that this will eventually reduce people's incentive to migrate.

Besides the problem that 'revolving door' migration policies are notoriously difficult to enforce (and often push migrants into permanent settlement), and the paradoxical fact that development often stimulates migration (see my previous blogpost on this), it is a myth that temporary migrants would be the best 'development workers'. Long-term migrants, who enjoy residency and are well integrated in receiving societies, are generally in a better position to contribute to development in origin societies. Most migrants who are sent back, do not aim to 'invest' in origin countries, and often try to return. It should therefore not come as a surprise that such 'co-development' programs generally fail (for instance, see this paper by Anaik Pian on the Spanish-Senegalese Retour vers l'Agriculture project).

The stated development intentions of temporary migration migration policies proposed by receiving states often is a fig leaf for a hidden agenda of forcibly returning irregular immigrants or rejected asylum seekers after providing them some financial assistance (see this paper). The real aim is return, not development. Curiously, receiving country governments use the humanitarian-sounding 'development' argument as a justification of depriving migrants of their rights.

Governments of wealthy, immigrant-receiving countries are unwilling to commit themselves to more liberal immigration regimes and improving the protection of rights of lower skilled migrants. In practice, the same governments often turn a blind eye to continuing irregular migration, because this is a source of cheap migrant labour. From a critical perspective, restrictive policies do not serve to stop immigration, but to facilitate exploitation of (migrant) workers. At the same time, anti-immigration rhetoric and belligerent declarations to 'fight illegal migration' are useful tools to rally political support.

Immigrant-receiving countries can increase the development potential of migration by creating legal channels for lower-skilled migration and integration policies that favour socio-economic mobility of migrants and avoid their marginalization. However, they are not really willing to do so. The unwillingness of receiving states to move forward in this area is reflected in the poor ratification record of the 1990 International Convention on the Protection of the Rights of All Migrant Workers and Members of their Families. Only 46 out of 193 UN member states have ratified this Convention so far. These were mainly countries of emigration; immigration countries have not been willing to support measures designed to protect migrants.


Because the position  of immigration and emigration countries on the rights of the lower skilled are totally juxtaposed, there is reason to be skeptical about the outcome of the HLD dialogue on migration and development, despite the multitude of governmental declarations of good intent that we are likely to hear.

Migrant rights are likely to remain the 'hot potatoe' issue - the vital link between migration and development, that will not be tackled unless governments of receiving countries show leadership by accumulating the courage to explain their constituencies that protecting migrant rights is also in the interest of 'native' workers and that offering pathways to long-term residence is in the interest of stability and prosperity of origin and destination societies.

In this context, it is important that receiving societies do not create renewed guestworker-type illusions about ‘temporariness’ by fully accepting and embracing the fact that a significant proportion of migrants will stay, as previous experience has generally shown. Recently renewed hope has been placed on circular migration as a 'solution' to what is perceived as a migration problem. However, this debate wrongly tends to equate circular with temporary migration.

The key to encouraging circular migration is to give migrants the genuine right and opportunity to migrate again if the return is unsuccessful. The paradox is that less immigration restrictions lead to more circulation, while restrictions tend fix migrants at the destination. If migrants are given the right to re-immigration, they will have fewer justified fears of returning, circulating and investing in origin countries. Excluding this possibility will continue to push migrants into settlement in very much the same fashion as the policies of the past few decades have done.
Posted by Hein de Haas at 9/17/2013 09:56:00 am No comments: