The case for border controls

Sovereign states have good reasons for controlling their borders. States are political communities with a need to define who is member, and who not.  This is important to determine who is eligible to vote, who has to pay taxes, and who has access to public services such as education, health care, social security, and other social services.

This is usually defined through citizenship, although there is a large grey zone between ‘unwanted foreigners’ and full citizenship. Immigration policies of modern states typically include ‘pathways’ to permanent residency and citizenship, in which permanent residents typically enjoy largely similar rights to citizens, except for the right to vote (at least in national elections).


It would therefore be foolish to argue that countries should just 'open their borders' by allowing everybody to immigrate and settle. Modern (welfare) states have an inbuilt need to define who is member and, hence, who has the right to work and who can use public amenities and social services. This creates an intrinsic need for immigration policies, which define who has the right to enter, stay, settle and eventually acquire citizenship. There is nothing inherently immoral about this.

It is thus a legitimate right of sovereign states to control their borders. To achieve this, modern states have designed sophisticated immigration rules that use elaborate criteria such as nationality, age, diplomas, marital status and wealth to grant or refuse people the right to enter and settle.

Contrary to what many people think, states have generally been rather effective in regulating migration. Although media images of migrants scaling fences or crossing the sea in rickety boats may give the impression that borders are ‘beyond control’, the fact is that the vast majority of migrants abide by the rules. With some exceptions, irregular migrants form a small minority of all immigrants, and research has shown that most undocumented migrants have in fact crossed borders in a legal fashion, but 'overstayed' after their visas expire.

The ‘open borders’ proposition is clearly naïve, as modern states need to establish rules about entry, stay and citizenship. However, the ‘closed border’ proposition is equally naïve. Total migration control would basically require a totalitarian state in order to effectively control all maritime and land borders.

Total migration control would require the literal ring-fencing of entire countries, a total disrespect of human rights (such as the right to family life and asylum), and a willingness and practical ability to invest massive resources to round up and deport undocumented migrants. It would also require giving massive powers and resources to police forces for internal surveillance, such as massive random ID checks and the frequent raiding of places where immigrants live work - including people's private houses where many domestic workers stay. In practice, such levels of total migration control are not possible in open, democratic societies, and any politician suggesting this is therefore selling illusions.

The reality of migration policy making is thus infinitely more nuanced than the false opposition between closed and open borders. In practice, immigration policies are about selecting, and not about ‘closing’ or ‘opening’ borders, neither of which exist in practice. This was confirmed by a recent analysis of 6505 migration policy changes in 45 countries I conducted with my colleagues Katharina Natter and Simona Vezzoli (for more information, see this free-for-download article which we recently published in International Migration Review).

Although politicians may have an interest in making people believe that they are 'tough' on migration, our analysis shows that over the past decades governments of most Western countries have liberalized immigration regimes by relaxing or giving up immigration restrictions for many migrant groups. Immigration has generally become easier for high- and even low-skilled workers, students and wealthy people. Also within regional blocks such as the EU, migration policies have been liberalized.

The main exceptions on this rule are family members of low-skilled workers and, particularly, refugees from developing countries. Refugees in particular have become the target of restrictions and fierce anti-immigrant rhetoric, although in reality refugees form a small minority of all immigrants.

The essence of modern migration policies is thus not about growing restriction or influencing numbers per se, but the selection of migrants; By favoring the entry of some groups, and discouraging the entry of others. This shows that both 'open' and 'closed' borders are simplistic rhetoric positions, which ignore the complex reality of migration policy making.

While the desire of political communities to regulate migration is legitimate, it is important to consider the effectiveness of policies, which are often blatantly ignored. As with any form of regulation, immigration rules can be circumvented by migrants. This particularly happens when immigration rules are at odds with the structural causes of migration. Classic examples are structural labour demand for migrant workers in destination countries without legal channels to match this demand (resulting in irregular migration and stay) or the unwillingness of countries to host refugees (resulting in an increased role of smuggling and boat migration and the risks refugees have to take to reach safe lands).

It is therefore inevitable that border controls will result in some degree of irregular migration. Also, research has shown that immigration restrictions often interrupt circulation by discouraging return and pushing migrants into permanent settlement, which is the contrary of what these policies intend to do. Such unintended and often unforeseen effects of immigration controls does not mean that the desire to control is illegitimate, or that the policies are totally ineffective, but reveal fundamental policy dilemmas in terms of how and the extent to which the desire to control regulate migration can be translated into concrete results, and against which financial and humanitarian price.

This shows that both the 'open' and 'closed' border positions are unrealistic and do not justice to the complex realities of migration policy making, which is primarily about the selection of migrants, and not about numbers, despite muscle-flexing political rhetoric suggesting the contrary.

States have good reasons to control immigration and it would be an huge exaggeration to say that borders are beyond control, because policies generally work and the majority of migrants abide by the rules. It is more correct to say that there are clear limits to border controls.
Posted by Hein de Haas at 8/29/2016 01:26:00 pm No comments: 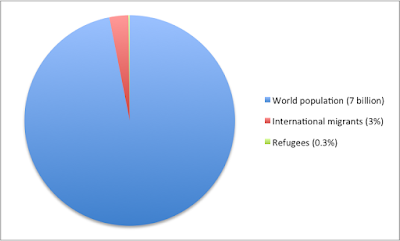