Decline in UK immigration is exaggerated and signals broader crisis

Last month, the British government celebrated the news that net migration to the UK has fallen by a third, according to data released by the UK Office for National Statistics (ONS). Net migration was estimated at 153,000 people in the year before September 2012, compared to 242,000 one year earlier.

Politicians were keen to ascribe this decrease to the toughening of immigration policies, and claimed that the government was on target to reach David Cameron's official target to bring net immigration down to "tens of thousands" by 2015.

Although it is common practice among politicians to ascribe migration decreases to their own 'tough' policies, policies are only one of the many factors that determines levels of immigration and emigration. Other factors, such as labour demand and the performance of the UK economy compared to other economies, play an equally, and probably much more important role. 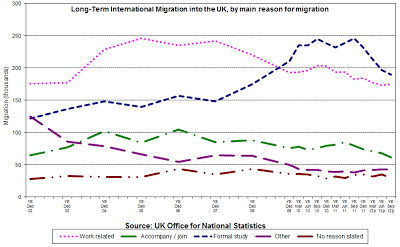 A closer look at the data shows that most of the decrease is explained by a 22 per cent decline in student migration (the blue dotted line in the figure above). While politicians have claimed that this is largely the results of tougher immigration rules for non-EU students, other factors such as the high British university fees and growing competition from universities abroad may also play a role.

UK Business Secretary Vince Cable recently argued that there is a problem of perception here: because overseas students are counted as immigrants, this numbers has been "easily translated into a flood of immigrants". Cable and other observers have argued that the decline in student numbers is not necessarily a good sign, since it also may reflect the deteriorating image of the UK as a potential destination for students and the skilled. This may actually harm British universities and long-term economic growth. 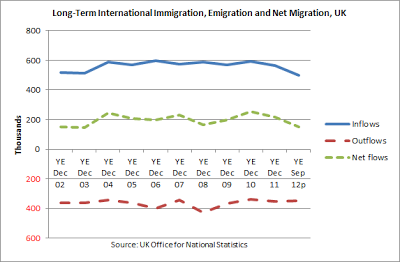 But, apart from this debate, the point remains that the decrease in immigration actually seems relative modest, particularly if we consider the longer term.

The above figure shows that over the last ten years, UK immigration has remained constantly high over the past decade. While labour immigration has been decreasing since 2008 in the wake of the economic crisis and a major slump in UK economic growth, soaring student immigration counterbalanced this typical 'recession effect' until 2012. Now student numbers are falling, this is translated into an overall decrease in immigration, although this decrease is not as spectacular as politicians would like us to believe.

Politicians typically exaggerate the extent to which they can control immigration. Economic growth, labour demand and wage levels play a major role in explaining fluctuations and trends in UK immigration over the past two decades. Therefore, as I wrote earlier, the best way to bring down migration is to wreck the economy.

Almost half of immigration to Britain over the past year concerned UK and EU citizens. This migration can hardly be controlled - unless the UK takes drastic measures such as stepping out of the European Union. Also family migration from outside the EU is difficult to curb significantly as long as the UK wants to respect basic human rights. The only categories on which the government exerts significant  influence is labour and student migration from non-EU sources - and these are exactly the categories that have been targeted by recent policies in a desperate and potentially harmful attempt to bring numbers down.

What will happen to UK immigration in the future will therefore only partly depend on whether the government will sway to the pressure by the education and business sectors to relax immigration rules for students and skilled non-EU migrants. (It is likely they will. As migration scholar Alan Gamlen recently argued, "This government will probably bend to business interests over nationalist ideals - they must look reluctant").

However, the course of future migration will mainly depend on the rate of economic growth and job creation in the UK. To understand the economy, is to understand migration. Currently, Europe is sinking further into an economic quagmire which have brought growth to a virtual standstill (or worse) in most countries including Britain. The few European countries whose economies are still growing, attract more migrants. Over 1 million people moved into Germany in 2012, particularly from southern Europe, which was the largest migration into the country since 1995.

While rising nations such as Brazil and China are increasingly welcoming immigrants, and the US seems at the brink of a major reform which will make labour immigration easier, politicians in the UK and various other European countries loose time and energy on opportunistic anti-immigration rhetoric, which are aimed to rally voters, but do nothing to solve problems.

Let me be clear: I am not arguing that migration is a solution to major problems. Numerous studies have shown that immigration is neither a panacea to solve economic or demographic problems, nor the cause of economic decline, mass unemployment or public deficits. The alleged positive and negative effects of immigration tend to get wildly exaggerated in public debates.

My argument is rather that immigration is a bellwether phenomenon that reflects the more general state of the society and the economy. Thriving economies attracted migrants, stagnant economies deter migrants. Rising nations attract migrants, declining nations try to keep them out. Anti-immigration politics reflect a culture of fear and an overall lack of confidence and political courage.

Rather than a cause for celebration, declining immigration therefore signals a more general state of crisis.
Posted by Hein de Haas at 6/21/2013 02:36:00 pm 5 comments: