Anybody believing that the Libyan crisis would create a “biblical exodus” towards Europe or the fear-mongering by Frontex and European politicians that up to 1.5 million migrants may soon arrive on European shores, should take a look at the chart below. 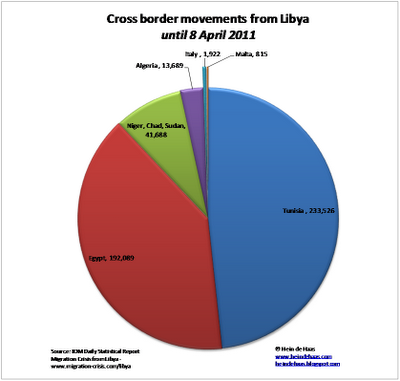 And please have a look at this website – It is a beautiful collection of pictures showing the human face of the Libyan crisis and the faces of the many poor people who kept the wheels of the Libyan economy turning over the past years - Most want to go home. How dare European politicians insinuate that these people will massively "invade" Europe?
Just some basic facts:


In sum: there is no indication that there is a major increase in migration from Africa to Europe in response to the popular uprisings in North Africa and the Libyan crisis, let alone that Europe would be invaded by hordes of desperate African migrants.
·         This was a myth from the start, and the evidence only proves this. It is only sad to see the media and politicians perpetuate this “myth of invasion”.
Posted by Hein de Haas at 4/13/2011 11:50:00 pm